Il Conductive tissue is the body of a plant. The plant life depends on the durability over time of its conductive tissue.
This analysis will consider the whole apparatus as Conductive Tissue suitable for lymph translocation, then it will focus on roots and stem.

Wounds to the root system are generally made during under and in-row works. WOUNDS to the underground conductive tissue heal before those to the open plant section, thanks to constant, elevated humidity. Also, outside contamination is mostly avoided since the wounds are immersed in a “solid medium”. Mushrooms attacking the root system automatically infect the plant and allow the mycelium to enter and colonize tissues. Works done on the soil and damage to the superficial root system aren’t usually the cause of the root system developing degenerative illnesses. The degeneration of the root system is often a direct consequence of soil hydromorphism. The root system does not develop under anaerobic conditions.

In order for the MYCELIUM to develop, certain conditions have to occur, such as high humidity, an already existing inoculum (mycelium in the soil) or one spread by work tools from other infected plots. Infection can also occur from spore germination, although it is much rarer in a vineyard. The main cause of infection is the mycelial inoculum. 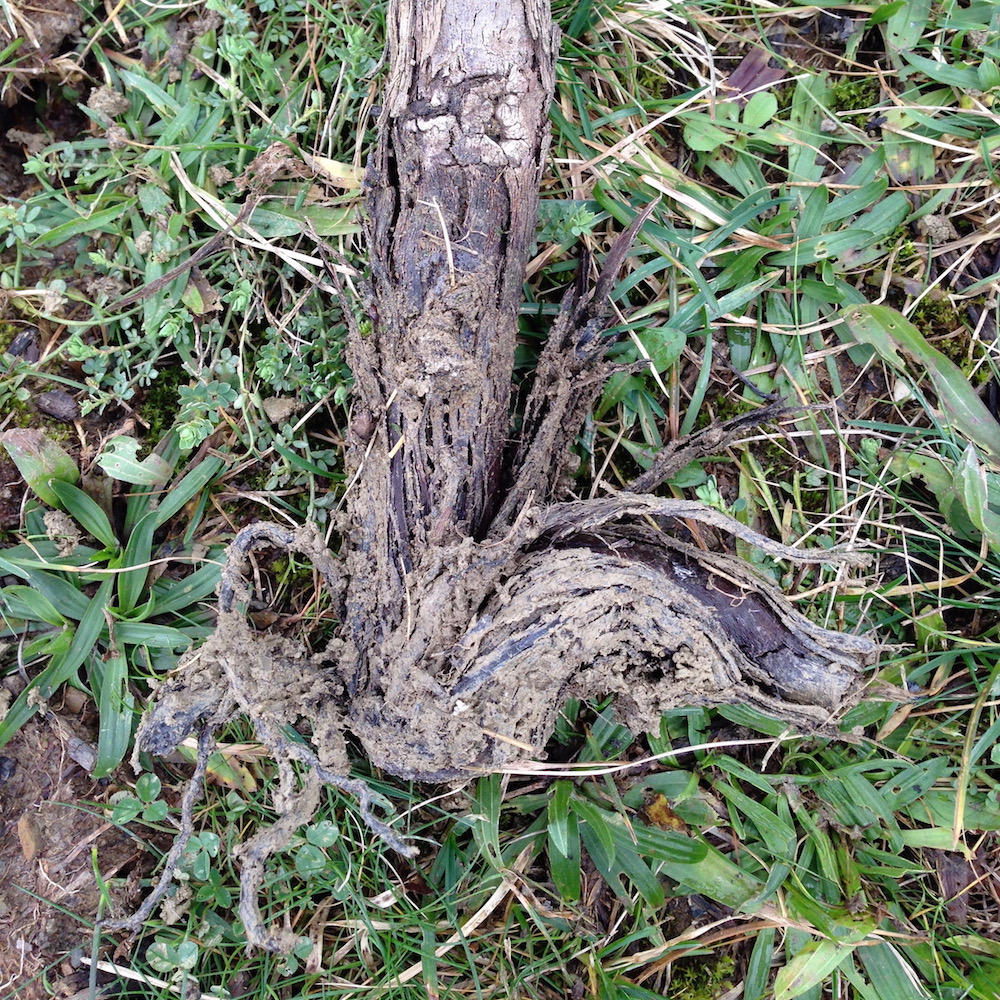 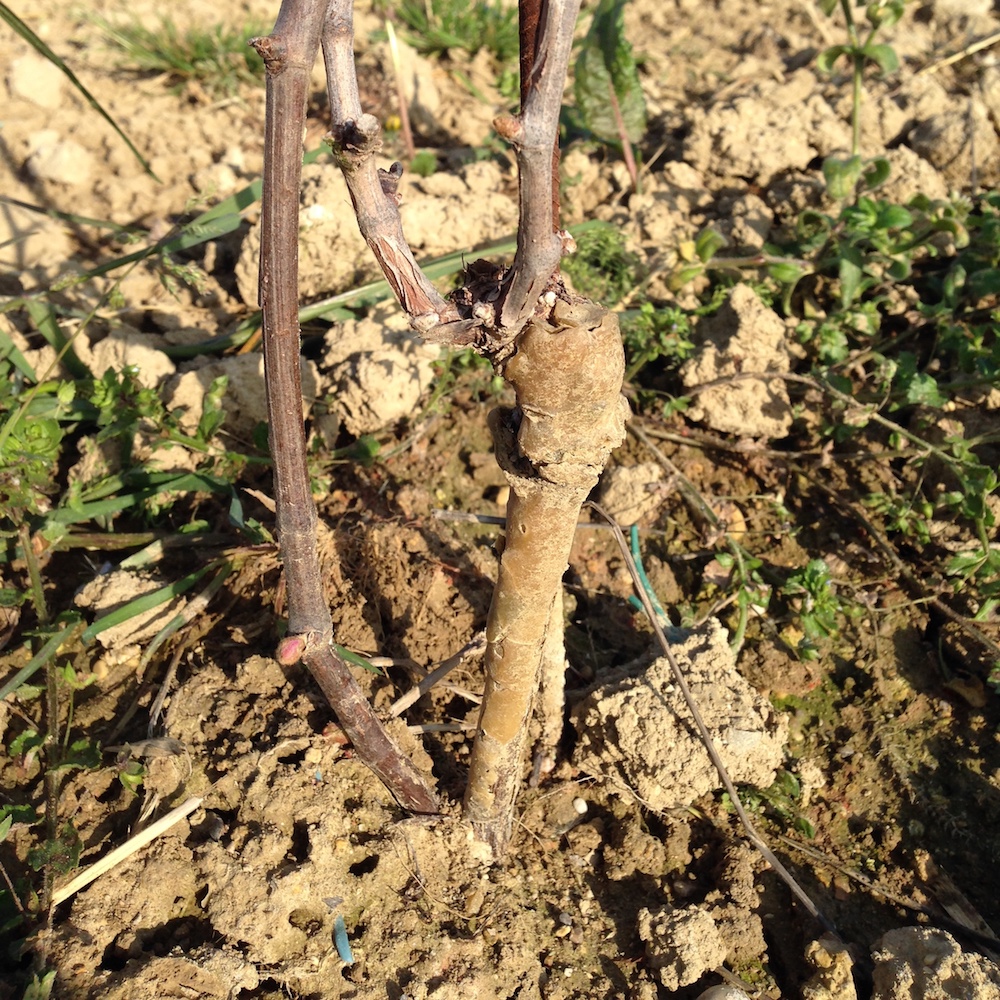 In some cases the rootstock can sprout. The causes can be different as the type of rootstock or bad workings in the nursery. These shoots must be eliminated, pruned at the base of the shoot, respecting the meristematic tissues.

The collar is the section of the plant that is in the transition zone between earth and air, an optimal environment for the life of an innumerable number of organisms, even pathogenic. The collar injuries are difficult to recognize, usually produced by the operator’s mechanic tools. The wounds produced are lacerations whose cicatrization involves long times and a high energy cost for the plant. 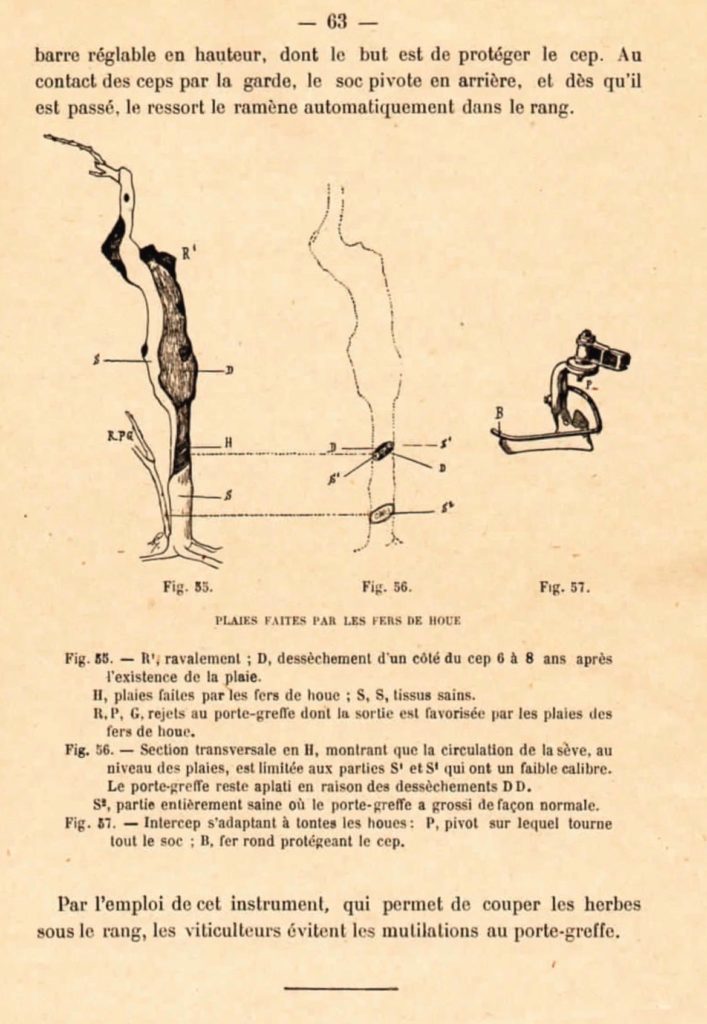 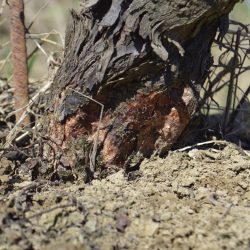 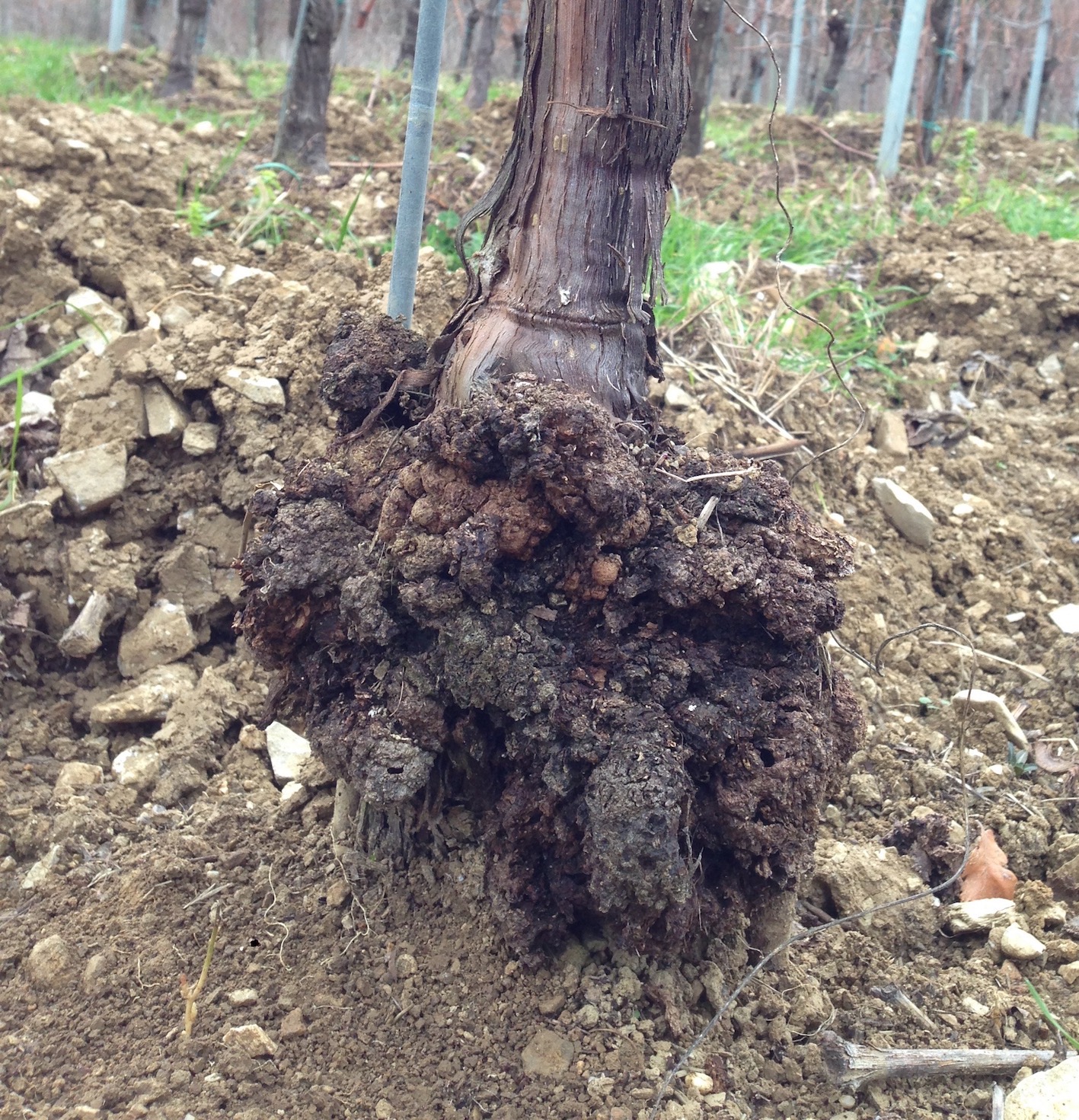 Wood exposed to air also remains exposed to the danger of the installation of fungi and bacteria. Among the bacteria the most common and dangerous for the vine is the Agrobatterio Tumefaciensis. The alteration of the tissue by this bacterium can be very important and extensive, and this may lead to the plant dying.
From the point of infection it can move acropetally within the plant, reaching the distal section of the stem.
An infected plant currently can’t be sanitized but to contain the infection it is necessary to remove the galls and disinfect the wounds with copper hydroxide. 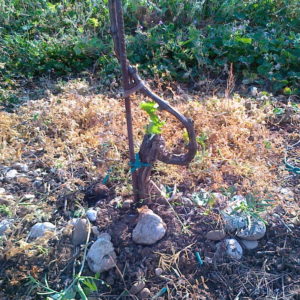 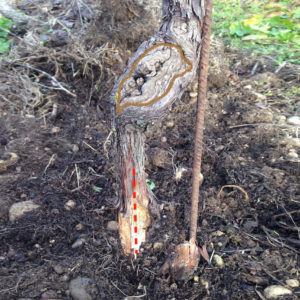 The grafting point of the young vine is a very delicate area. Here the branch with which the stem of the plant that was chosen among those of the upper portion is formed. The stem will thus be aligned with the rootstock and will not offer mechanical resistance to the spillage / grass trimmer.

All the injuries mentioned above are serious injuries because the renewal of the conducting tissue is not accepted.

All the injuries mentioned above are serious injuries because the renewal of the conducting tissue is not accepted.

The wounds in the stem above the graft point of the rootstock are serious as those in the collar area but more easily identifiable and curable.

CONSERVATIVE FUNCTION: it keeps the head or the cordon vital in its entirety, helping the formation and development of the buds. Furthermore, keeping its position fixed in space will not generate vegetative or grape bunches bundling.

Whatever the pruning system is, it is recommended to keep alive and nourished the tissues underlying the vegetative point. With a thick cut, it is necessary to make the cut itself on a flow of lymph that nourishes the scar tissues and prevents or reduces the dissection of the reference wood. 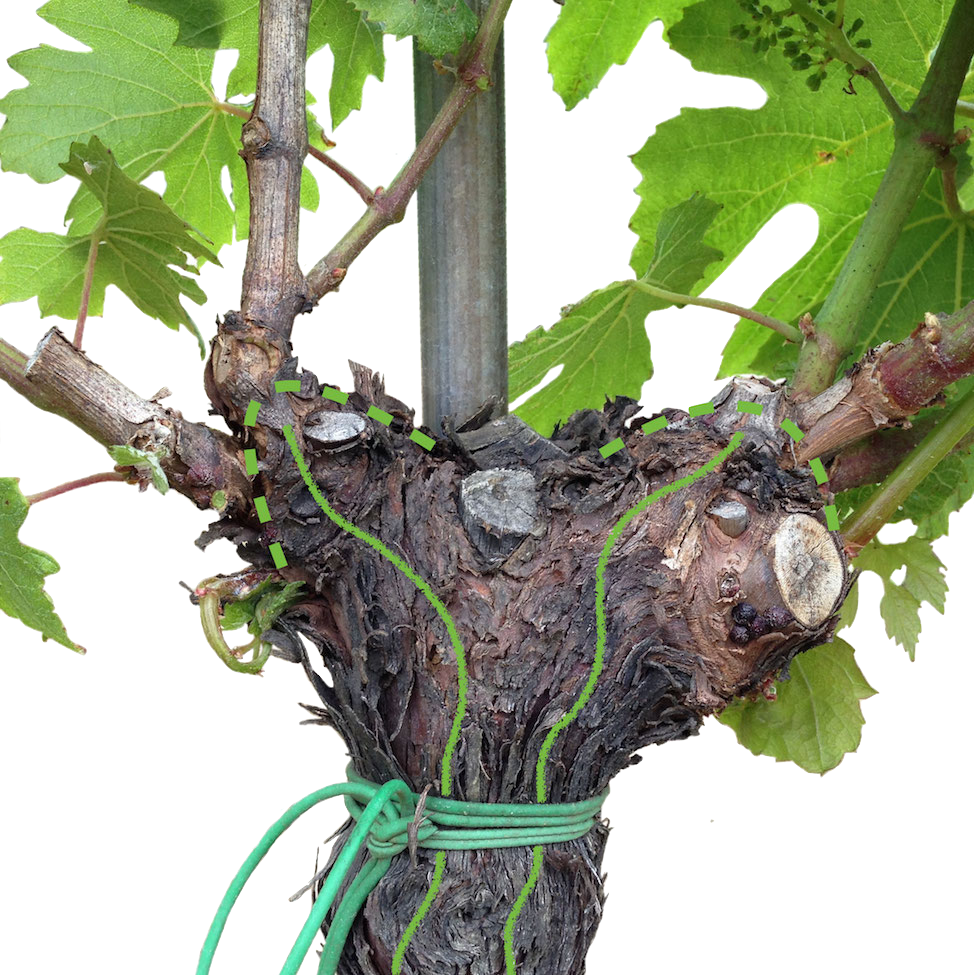 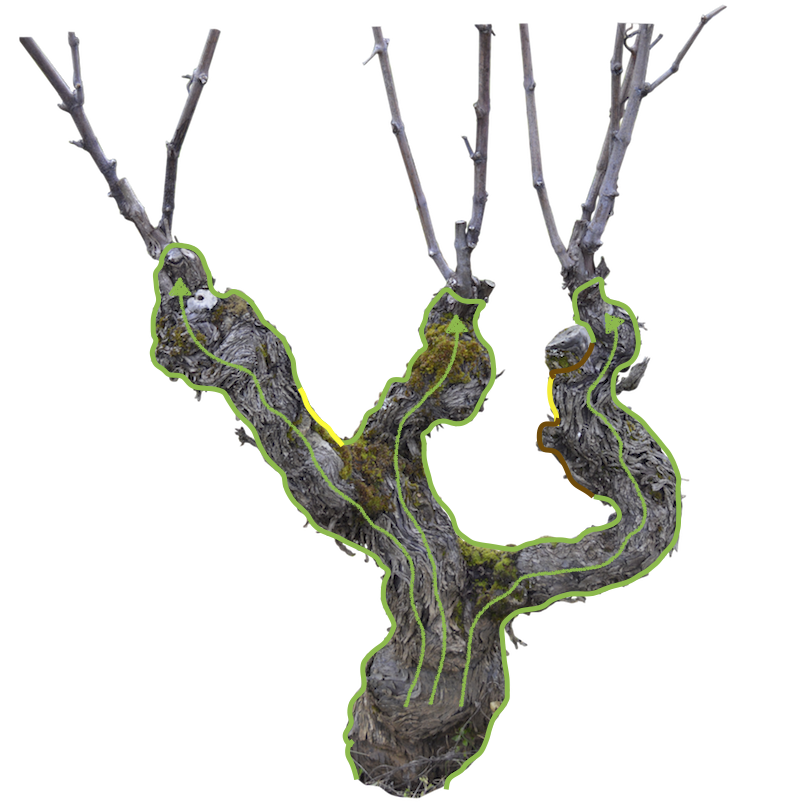 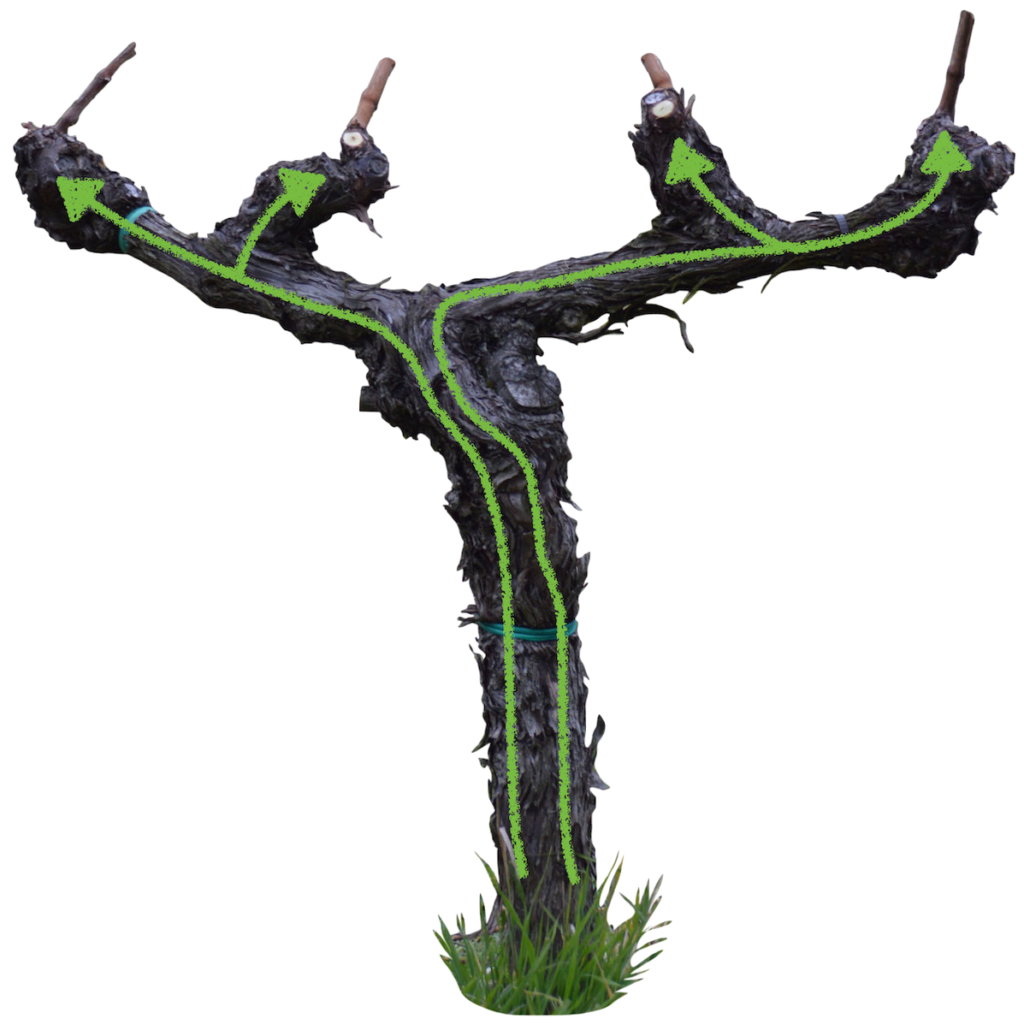 The cuts must comply with the tolerance of a few millimeters, avoiding cutting off the base of the branch rich in meristematic tissues used to heal wounds. This does not mean that the wound will not be infected but the risk of infection by mushroom spores will be reduced by pruning with this technique. The crown around the base of the cane is clearly visible to the naked eye.

Moreover the infection risk depends on several factors such as the cultivated variety (more or less susceptible), the environment in which the vineyard is placed (proximity to the wood, damp environment, vineyards nearby neglected ) and breeding techniques. 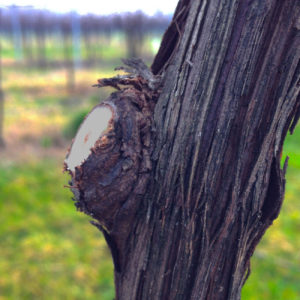